Is PMP the Best Certification for the Construction Industry?

3941 views
In All Blogs, PMP Certification / / By: ProThoughts 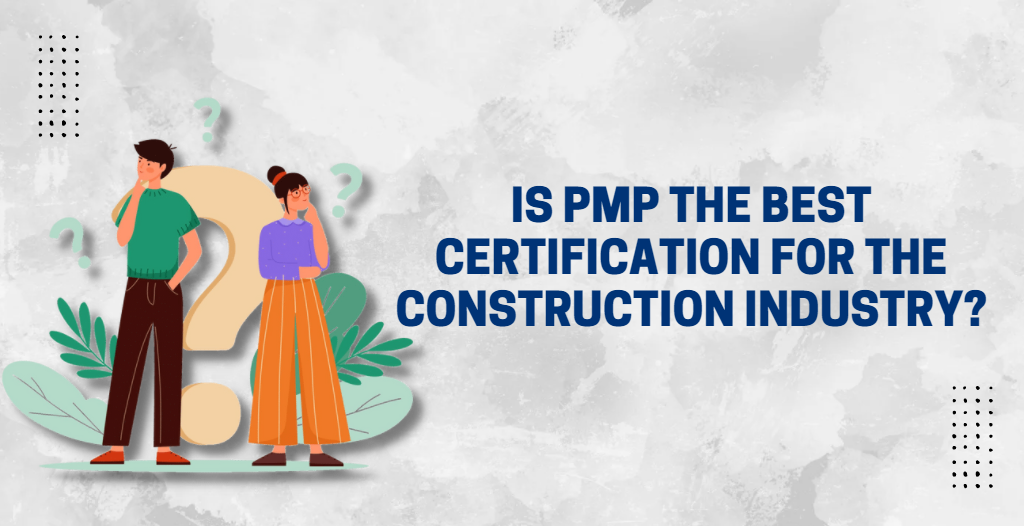 The waterfall approach is used in construction project management. Specifically, the PMP certification practices technique. We’ve worked with a lot of project managers in this area. The more fundamentally they understand the PMBOK principles, the better their performance and achievement. For these project managers, scope, schedule, and money are not just roadblocks; they are hard guidelines that must be acknowledged, communicated, included, and engaged in order for the project to succeed for the organization to achieve its strategic goals.

What role does PMP play in the Construction industry?

Because construction projects are typically large and compact, PMP is individually valuable in these industries. As a result, a minor perception or oversight can have a significant influence on project cost, time, quality, and a variety of other factors. As a result, the need for competent project management will always exist.

Furthermore, there is no other project management certification that can supply you with as much information as the PMP. PMP’s value in the construction industry includes, but is not limited to:

Because construction projects are typically costly and complicated, the project contract and stakeholder credentials are two of the most important aspects of a project in the construction industry. As a result, the project contract should always be complete and properly defined from all perspectives. Negligence might be highly costly in the long run. Similarly, significant numbers of people are frequently involved in construction projects. stakeholders and their correct identification is required because it might be terrible for the project if a stakeholder is desired and discovered later. In Certain Developing Countries Construction industry is booming as there is increasing demand to create new infrastructure facilities frequently. For Example, PMP Certification in Mauritius, especially in the construction industry can provide you with great employment opportunities with higher pay. The PMP Certification provides you with all of the skills you’ll need to complete this task correctly.

In sophisticated projects, precise planning and management strategies for every aspect of the project, such as expenses, timeline, quality, scope, HR, communication, risks, acquisition, and so on, are critical. These plans come together to produce a project management plan, which is the project’s main document. As a result, ignoring precision planning in the building industry can be disastrous. PMP certification teaches you how to fully prepare a project and how to obtain detailed blueprints for all project perspectives.

All aspects of a project should be tightly regulated and managed, from scope to state, and from HR to purchases. Monitoring and command is an important operation in the construction industry since a slight miscalculation in scope or expense creep can be dangerous in several projects.

The status of deliverables is similar. Customer satisfaction should always be monitored. PMP Training equips you with all of the tools and procedures necessary for accurate project monitoring and control, which is the key to completing a construction management plan.

The majority of construction plans include generating a finished product, and it is critical to obtain final approval from the customer at each stage of the process. Similarly, the majority of construction projects are of a similar nature, and the same approaches appear to be repeated. As a result, documenting all of the exercises learned during the project and archiving all project records for future evidence is both beneficial and required. It has the potential to be advantageous to future ventures. PMP Certification demonstrates all of the methods for joining a project and what the risks are.

The PMP® Certification is held by the majority of survey respondents (82 percent). In the majority of the nations studied, PMP® certification holders report higher median earnings; however, this varies greatly from country to country. In the Philippines and Indonesia, PMP® holders report median salaries that are more than 80 percent greater than non-certified workers.

PMP certification is extremely beneficial in the construction industry since it gives you the necessary methodology, structure, and tools for successful project management. Because with development initiatives, huge sums of money and other resources are at stake, and failure comes at a colossal price.

Is PMP certification useful when working on construction projects?

Do construction companies appear to be looking for PMP-certified individuals?

Yes, the answer to the first question is without a doubt. PMP expertise will also help you in your day-to-day responsibilities as a project manager on a construction project. It will assist you in correlating all of your efforts taken to alleviate project issues and establish a more uniform system of execution at position levels.

The relevance of project management continues to be incorporated into the core of execution in large construction plans in Mauritius, although construction companies are not as eager to engage PMP-certified professionals as the IT sector is. Few firms with global developments and multinational giants, on the other hand, will undoubtedly give you an advantage.

How Do You Become a Successful Disciplined Agile Coach?

FOR THE INFORMATION, YOU WILL BE CONTACTED WITHIN THE NEXT 24 HOURS.

In the meantime, keep up to date with us by visiting us on :